“For me this is a meaningful way, on behalf of my family, to show respect for the men who fought in PNG and honour the sacrifice they made,” 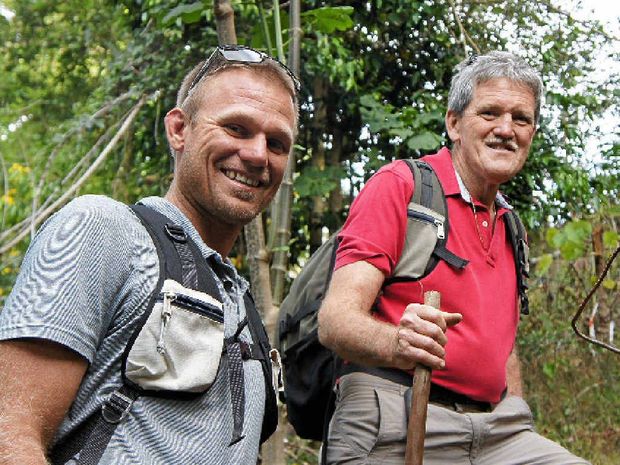 GYMPIE business owner Gary James is in training to tick off a major item on his bucket list and honour the sacrifice of two uncles who were killed in Papua New Guinea during the Second World War.

In September, Gary, 65, and son Brad, 38, will walk close to 100km across gruelling mountain terrain in their quest to raise $5000 as part of The Salvation Army Kokoda Trek 2016.

Their nine-day hike will coincide almost to the day when, 74 years ago, Gary’s uncles Joseph “Digger” James, 26, and Edward “Eddie” James, 19, were killed in combat on the track.

The brothers were raised at Cooloolabin, near Yandina, before the family moved to a Gympie dairy farm in the 1930s. Both were privates in the 2/25th Infantry Battalion, which trained at Caboolture to prepare for jungle warfare.

Sadly, Digger James went missing in action on Ioribaiwa Ridge on September 16, 1942, and his body was never found. Just a month later, his younger brother Eddie was fatally shot by a Japanese sniper while on patrol near Templeton’s Crossing.

Mr James will be walking close to the spot where Eddie was first buried, prior to his body being moved to the Bomana War Cemetery at Port Moresby.

“For me this is a meaningful way, on behalf of my family, to show respect for the men who fought in PNG and honour the sacrifice they made,” he said.

“Without their bravery and dedication, we would not be able to enjoy the life we now lead in Australia.”

While walking the Kokoda Track has been a long-held dream, Mr James said he was inspired to take action by Laurie Clarke, friend and former owner and manager of the Bank of Queensland in Maroochydore, who is undergoing treatment for cancer.

“Laurie would always ask me along to the Red Shield Appeal lunch, so I wanted to get on board and do something meaningful to support the good work that the Salvos do,” Mr James said.

“Whenever my training gets tough, I just think of Laurie and realise that my pain is nothing compared to what he is going through. It’s what inspires me to put a greater effort in.”

At 65, Mr James is the oldest member of the group doing the trek and said the physical challenge ahead had given him a concrete goal to stay fit and healthy.

Despite a slight setback of a sprained ankle last week, he plans to increase the length and intensity of his training sessions as the expedition nears.

With Anzac Day fast approaching, Mr James and his son Brad, a Sunshine Coast builder, will continue their family tradition of attending the April 25 ceremony at Jones Hill, near Gympie.

The historic site features trees planted for each local lost in the Second World War and the James family always leave an RSL poppy under the plaque on Eddie’s and Digger’s memorial tree.

The pair will also take poppies to Kokoda to place in the trees near where the brave soldiers died.

Mr James said he was confident of reaching his $5000 fundraising target thanks to the generous support of friends, family and business associates. To date, 12 supporters have pledged more than $1200, however more donations are needed.

“This is going to be a physically and emotionally challenging journey for me. But with every step I take, I feel privileged to be helping The Salvation Army empower hope, recovery and resilience for everyday Australians,” Mr James said. Chris Owen – requiem for a filmmaker between worlds