“When we’re doing Bible translation, we’re not just producing a text as fast as we can,” Nystrom says

Papua New Guinea (MNN) — The ability to read and comprehend God’s Word is a vital step in the process of spiritual growth.

Wycliffe Bible Translators is one organization working tirelessly to put God’s Word in the hands of the unreached. In Papua New Guinea, translators have been able to increase their efficiency through advanced software.

“Using technology in Bible translation does speed things up, but one of the things it also does is help us find errors we otherwise would never find if we just had to search for them with our own eyes,” Wycliffe’s John Nystrom says.

“But now that we have good tools for helping us find all the places we’ve translated something in a certain way, we’re able to spend more time doing what only a human being could do, and that is, asking ourselves, ‘Is this translated correctly?’ And, ‘Is it communicating clearly to the people who speak this language?’”

For example, when translating 1 Timothy, 2 Timothy, and Titus, Nystrom said his team had difficulty translating the phrase “clean conscience.” Then, once they translated it, his team would have to find all the places where that expression was used in those books. Since using new software, however, the process has become much simpler.

“We used to have to do that by hand,” Nystrom says. “Now, the software we use for doing translation, called ParaTExt, helps us find all of those places so we don’t have to try to remember where they are. It shows us where they are and exactly how we’ve translated that phrase in that verse. That makes it much easier for us to make the translation much more consistent and accurate, because we don’t have to do it by hand.”

Efficient production, however, isn’t the only goal. Wycliffe trains local pastors in Bible translation as a means to establishing long-term spiritual growth.

“When we’re doing Bible translation, we’re not just producing a text as fast as we can,” Nystrom says. “We’re also developing people who are training to continue the Bible translation movement in their culture, in their country, and to help other people do that as well. 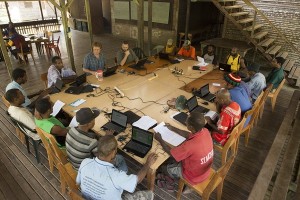 “When local pastors are equipped to do Bible translations in their own languages, they’re able to preach the Gospel much more accurately and confidently than they’ve ever been able to do before, because they’ve wrestled with every verse and every phrase in the books they have been translating and then are preaching. And that is a wonderful thing for their congregations and for the new churches they help to plant.”

Does Bible translation sound like something you would want to get involved in? Nystrom says Wycliffe has need for workers of all different professions, such as bookkeepers and accountants.

Click here to learn how you can get involved! Our Pukpuks Might be Heading to New Zealand Zoos